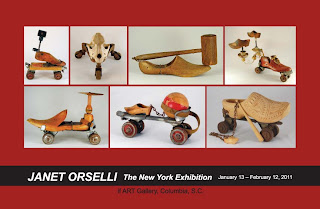 
“These imaginative means of locomotion,” Orselli says, “are joined together by hand to form entirely new entities. Engaging and thought provoking, these found object constructions with their rich visual histories evoke the past while outrageously rolling toward the future.”
“My raw materials are leftovers from the past, or what some might call ‘worn out stuff’. These objects have a story to tell -- if we listen. All of them want to move some more. Each struggles to get ahead - some drag a weight behind them, others have a shell to break through, and still others - await takeoff. They are all trying awfully hard. Ultimately they attain arthood by releasing their object identity and joining others in a new (lively) purpose.”
Orselli (b. 1954) is an independent installation and performance artist. She has had solo shows at O.K. Harris gallery in New York City, the Turchin Center for Visual Arts in Boone, N.C., and at the Sumter Gallery of Art in Sumter, Charleston’s Gibbes Museum and the Burroughs & Chapin Museum in Myrtle Beach, all in South Carolina, and elsewhere. Her installations have been featured at Schopf Gallery on Lake, Chicago, IL, Holter Museum of Art, Helena, Montana, Indiana State University, Terre Haute, Indiana, and in three consecutive Accessibility Project events in Sumter, SC. Orselli’s found object constructions have been in national group exhibitions throughout the country. In 2001, she was selected to create a two-room installation for the South Carolina Triennial at the S.C. State Museum. That same year she was also awarded an artist scholarship by the S.C. Arts Commission to attend Anderson Ranch Arts Center in Colorado. In 2005, she received the prestigious Pollock-Krasner Foundation Fellowship.
OK Harris owner Ivan Karp, as the co-director of Leo Castelli Gallery in the 1960s, was instrumental in launching the careers of pop artists such as Andy Warhol, Roy Lichtenstein, Robert Rauschenberg, Claes Oldenburg, Tom Wesselman and John Chamberlain. Karp also was the first to exhibit in New York work by prominent contemporary artists Duane Hanson, and many others.
Posted by Wim Roefs at 3:03 PM

I really want to thank Dr Emu for saving my marriage. My wife really treated me badly and left home for almost 3 month this got me sick and confused. Then I told my friend about how my wife has changed towards me. Then she told me to contact Dr Emu that he will help me bring back my wife and change her back to a good woman. I never believed in all this but I gave it a try. Dr Emu casted a spell of return of love on her, and my wife came back home for forgiveness and today we are happy again. If you are going through any relationship stress or you want back your Ex or Divorce husband you can contact his whatsapp +2347012841542 or email emutemple@gmail.com website: Https://emutemple.wordpress.com/