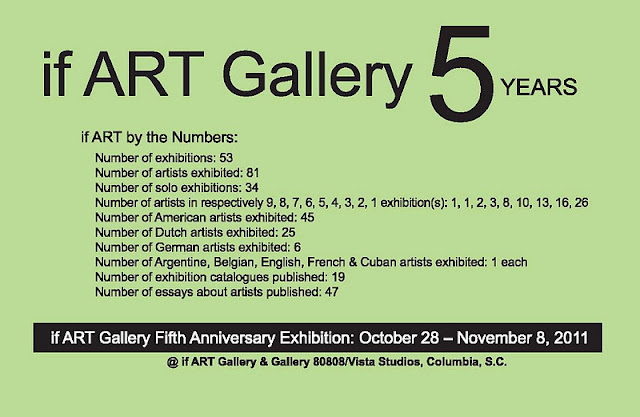 At Gallery 80808/Vista Studios, 808 Lady Street, Columbia, S.C., if ART Gallery presents Contemporary Carolina Abstraction I: Carl Blair, Ashlynn Browning, Laura Spong, Katie Walker & Don Zurlo. The exhibition opens February 17 with an artists’ reception from 5:00 – 9:00 p.m. and runs through February 28. The exhibition is the first of two and will be followed in March by Contemporary Carolina Abstraction II: Michael Brodeur, Anna Redwine, Tom Stanley, H. Brown Thornton, Enid Williams & Paul Yanko, also at Gallery 80808/Vista Studios.
Both exhibitions run alongside but independently of the large exhibition at the South Carolina State Museum Abstract Art In South Carolina: 1949 – 2012, which will open February 24. if ART Gallery artists in both exhibitions are Blair, Spong, Walker, Stanley, Thornton, Williams and Yanko. The if ART exhibitions will present all South Carolina artists except Browning, who is from Raleigh, N.C., showing that abstract painting is alive and well in the Carolinas.
Kansas native and Greenville, S.C., resident Carl Blair (b. 1932) in 2005 received South Carolina’s Elizabeth O’Neil Verner Governor’s Award for the Arts for Lifetime Achievement. He has been as an artist, administrator, educator and a driving force in South Carolina arts since 1957, when he began teaching at Bob Jones University, from which he retired in 1998. He has shown in galleries and museums along the East Coast as well as abroad. He has had several museum retrospectives since 1995. In 1999, he was included in “100 Years/100 Artists: Views of the 20th Century in South Carolina Arts,” the South Carolina State Museum’s look back at the 20th century.
Ashlynn Browning (b. 1977), who joined if ART Gallery in 2010 is a recipient of a Joan Mitchell Foundation Grant and has exhibited at New York’s CUE Foundation and Lincoln Center. Other recent exhibitions include those at Hallway Projects in San Francisco, Artspace, Galway, Ireland and the University of North Carolina in Greensboro. Browning has received grants and residency fellowships from the Vermont Studio Center, the United Arts Council and the Virginia Center for Creative Arts. Her work was featured in the 2009 Southern edition of New American Paintings. Browning was born in Charlotte, N.C.
Laura Spong (b. 1926) is among South Carolina’s most prominent abstract artists. Since her 80th-birthday exhibition in 2006, the Columbia artist’s career has taken off with multiple solo exhibitions throughout the state, brisk sales, and the acquisition of her work by the South Carolina State Art Collection, the South Carolina State Museum and the Greenville County Museum of Art. Spong currently has a solo exhibition at the Spartanburg (S.C.) Museum of Art and will open another solo show in march at Young Harris College in Young Harris, Ga. Also in March, she will be in a two-person exhibition with Carl Blair at the Florence (S.C.) Museum of Art.
Greenville artist Katie Walker (b. 1970) has exhibited in the Greenville County Museum of Art; the Spartanburg (S.C.) Museum of Art; the Pickens County (S.C.) Museum of Art and History; the Columbia (S.C.) Museum of Art; and the Georgia Museum of Art in Athens. Her work was included in the 2005 Florence Biennale in Italy, where she was an award winner. Since 1991, Walker’s work has been in more than 70 exhibitions throughout the Southeast and beyond. Her work appeared in New American Paintings, Vol. 40, 2002, and the publication’s 2010 anniversary edition.
Lexington, S.C., artist Don Zurlo (b. 1934) has exhibited at the Walker Art Center in Minneapolis, MN, the Newark Museum of Art in Newark, NJ, Trenton’s New Jersey State Museum, the Flint Institute of Art in Flint, MI, the McKissick Museum at the University of South Carolina and the South Carolina State Museum in Columbia, the Howard Wise Gallery in New York City and elsewhere. His most recent solo exhibition was in October 2010 at if ART Gallery. Zurlo has taught art at South Carolina State University in Orangeburg and Allen University in Columbia.