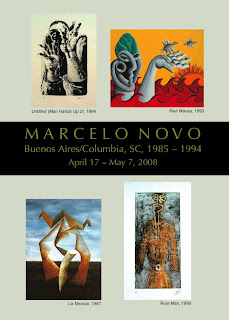 The upcoming exhibition at if ART Gallery, Marcelo Novo: Buenos Aires/Columbia, SC, 1985–1994, opens to the public on Friday, April 18. It will run through May 7, 2008. The exhibition will present early work by Argentine artist Marcelo Novo, a native of Buenos Aires who has lived in Columbia since 1992. Novo (b. 1963) will show paintings and prints, including monotypes, etchings, drypoints, lithos and prints combining several techniques.
Novo has been in dozens of exhibitions across the country and abroad, including at New York City’s Cinque Gallery, the Deland Museum of Art in Deland, Fla., and Buenos Aires’ Centro Cultural Recoleta. Novo’s 10-year retrospective was at the Sumter (S.C.) Gallery of Art in 2003. In 2004-2005, Novo developed with choreographer Miriam Barbosa the ballet “Catharsis,” performed by the University of South Carolina Dance Company. Novo was the curator for “Accessibility 2005: Transplanted,” an installation art project in Sumter, featuring six Latin American artists living in the United States.
Posted by Wim Roefs at 2:47 PM