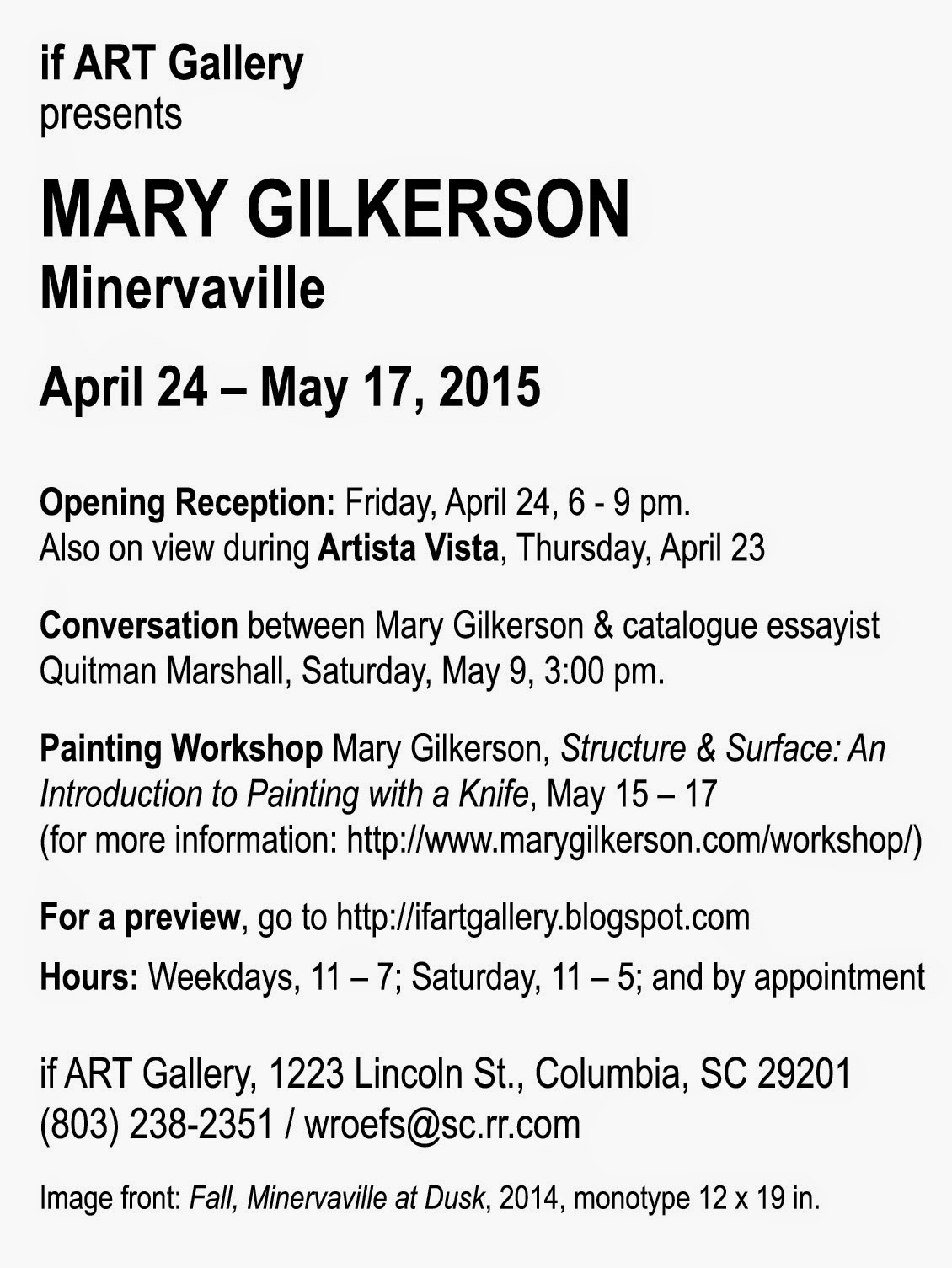 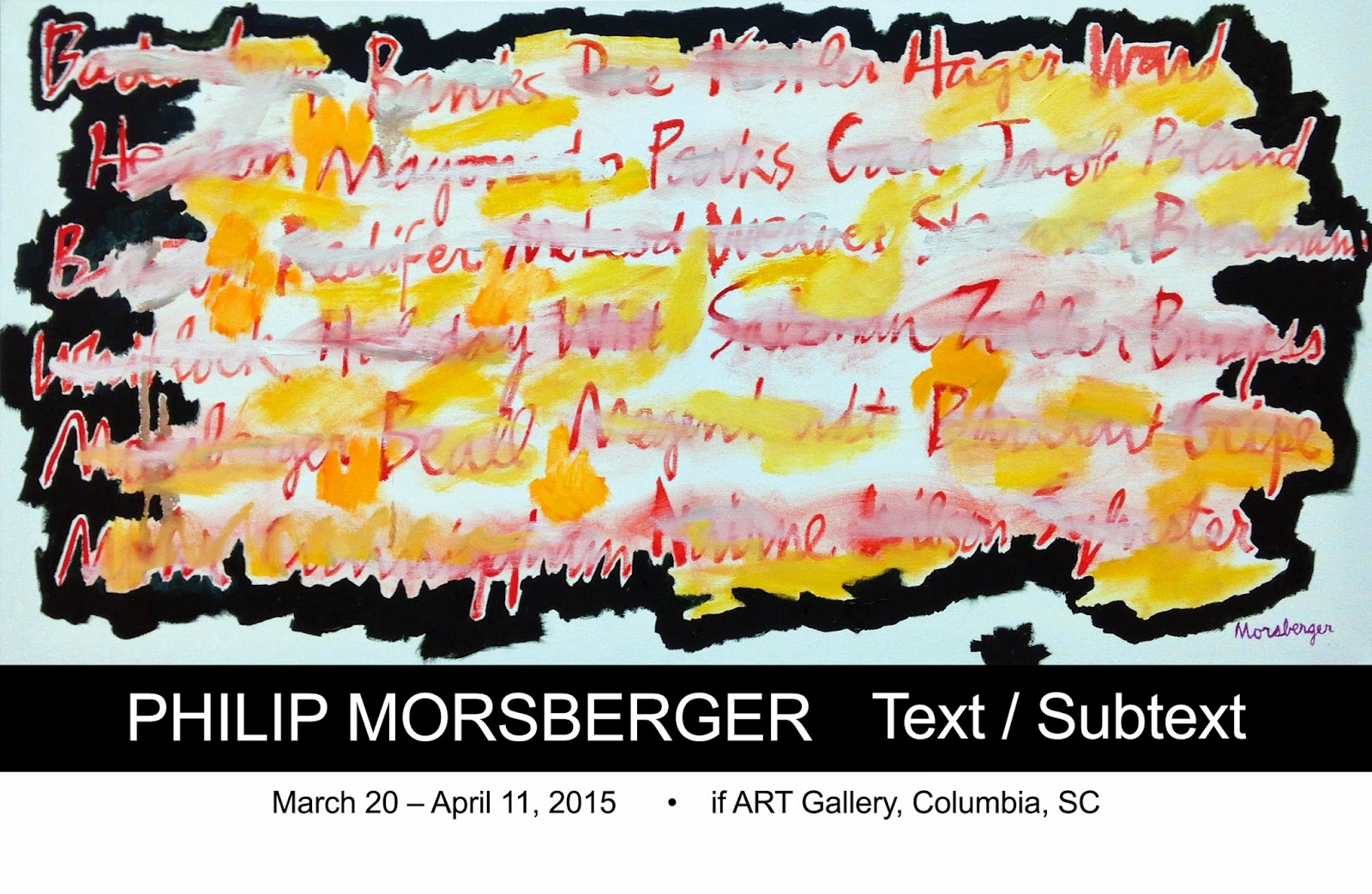 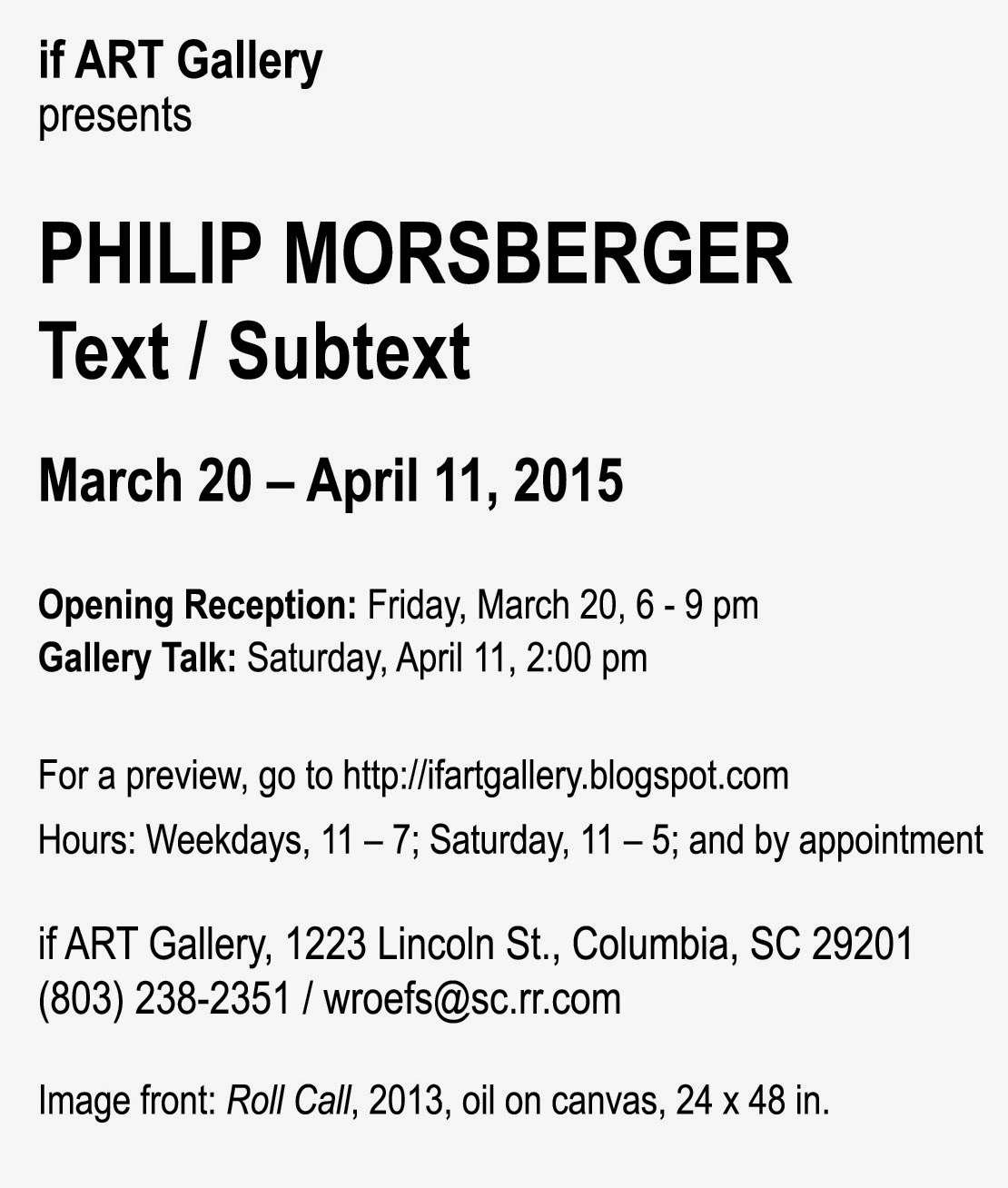 For a talk by Philip Morsberger about making art, CLICK HERE.

For an essay accompanying the exhibition, CLICK HERE.
Posted by Wim Roefs at 1:56 PM No comments:

WHAT: A workshop for painters of all skill levels seeking strategies for using acrylic paints, mediums and gels to achieve a level of finesse usually associated with oil painting techniques.

HOW MUCH: $250 per participant, to be paid in advance by cash, check or credit card.

HOW MANY: Limited to 15 participants.

WHAT TO BRING: All tools, including synthetic brushes for thicker paint applications (bristle type) and softer brushes for blending and glazing; a water container; paper towels; one prepared canvas or wood panel, 20 x 16 inches; #2 pencil; notebook; and phone or tablet with camera (see workshop description below for details).

WHAT NOT TO BRING: paint, mediums and gel, all provided by Golden Acrylic, and canvas board, provided by Garrett.

*Phil Garrett & if ART Gallery reserve the right to cancel the workshop with a full refund in case of insufficient participation.

DAY ONE, Fri., March 4, 6:30 – 8 pm: Informal introduction with wine and cheese to discuss the paints, media and gels used during the workshop and the best way to prepare canvas, linen, wood panels, etc., to get the most from acrylic painting.

DAY TWO & THREE, Sat. & Sun., March 5 & 6, 10 am – 4 pm: Learn which pigments provide clean color mixing and a tried and true palette, how to paint in layers thick and thin and complete several paintings that can serve as reference for future paintings. One-hour lunch break; bring your lunch or go to one the many restaurants near the gallery.

Phil Garrett is among his native South Carolina’s most prominent artists and printmakers and owner of King Snake Press in Greenville, S.C. Garrett has completed numerous artist residences and taught painting and printmaking in venues across the United States, including The Penland School of Craft in Penland, N.C. He joined the Golden Acrylic Working Artists Program in 1999 and has lectured and taught acrylic painting in the United States, Japan and Europe. Garrett’s work is represented in the South Carolina State Art Collection, the Greenville County (S.C.) Museum of Art and other public and private collections in Europe, Japan and the United States.

The workshop will cover how to get oil-like effects using acrylic paints, mediums and gels, including the new OPEN paints. These paints allow for an extended working time that can give painters much more control over blending and overall manipulation to achieve wonderful controlled effects. The paints also can be used in combination with existing Heavy Body and Fluid Acrylics and their mediums, gels and additives. This provides painters a truly comprehensive system of paints.
On a prepared canvas or panel, workshop participants will work from a selfie taken with your phone or tablet to make a subtractive underpainting using Open Acrylics, complete a value underpainting in grays and go over the best paint and gel combinations for alla prima painting.
The workshop will cover overpainting, blending and glazing. At the end, Garrett will discuss how to correctly varnish the completed painting. Along the way, the workshop will cover lots of solid techniques discussed in Garrett’s book Inside Acrylics while providing a great time painting.

Jean Hein from Columbia Baroque will be joining Dr. Hawkins on the compositions by Clementi and Von Preussen with a Baroque recorder.

Patrick Hawkins holds degrees in performance from the Peabody Conservatory at Johns Hopkins University, East Carolina University, and Arizona State University. Post-graduate studies in music education were taken at California State University, Los Angeles, and at the University of Washington, Seattle. His major teachers have included Janette Fishell, Peggy Haas Howell, Kimberly Marshall, and Carole Terry (organ); Shirley Mathews, and Webb Wiggins (harpsichord); and Shuko Watanabe and Joseph Rackers (piano). In 1993 Dr. Hawkins made his European debut at the Cambridge Summer Recitals. He has regularly returned to Europe to perform in France and Germany, and in 2013 he was invited to lecture at the 2nd International Conference on Early Keyboard Music at the University of Edinburgh, Scotland. In the United States, he has appeared as soloist at four regional conventions of the American Guild of Organists and in 2014 he performed a square piano recital for the National Conference of the Historic Keyboard Society of North America held at the National Music Museum in South Dakota. He has recorded music of Johann Sebastian Bach for Arkay Records and his recordings have been featured on National Public Radio. Dr. Hawkins lives and teaches in Columbia, SC.